His graffiti once plastered Hong Kong, dense black ink calligraphy applied with a brush to any public surface, telling the outlandish story of why he believed the territory belonged to him.

The self-declared “King of Kowloon”, Tsang Tsou-choi, lived in poverty but became a local hero and internationally renowned artist, creating around 55,000 outdoor works over five decades on everything from post boxes to flyovers.

But six years since his death in 2007, aged 85, only four pieces of his distinctive Hong Kong street art remain in situ, the rest swept away by an unstoppable wave of redevelopment or painted over by the authorities.

Hong Kong’s arts community is now fighting to preserve the vestiges of his public work.

“The King’s work belongs to the street, but most of it has already vanished or been cleaned up,” says photographer Simon Go, who was a friend of Tsang’s and runs Hong Kong heritage organisation Hulu Culture.

“Preserving these remaining works where they are is our last chance to save his true legacy. But the authorities want a clean city, where every community looks the same.”

Heritage regularly falls victim to construction in Hong Kong and the government is often criticised for doing too little to preserve cultural history.

Lau Kin Wai, art critic and friend of the King of Kowloon, says that he has tried to convince the authorities to safeguard Tsang’s works, without success.

“It makes me angry,” he told AFP. “The LCSD (Leisure and Cultural Services Department) does not have a sense of culture. He is one of the earliest modern graffiti artists, but they say it is arguable whether his work is art.”

Tsang came to Hong Kong as a teenager from the southern Chinese province of Guangdong and started his prolific graffiti career in the 1950s.

Believing his ancestors once ruled the city’s Kowloon district, his street art promoted his claim to be the rightful monarch, depicting his family tree and raging against colonial powers in bold columns of Chinese characters. 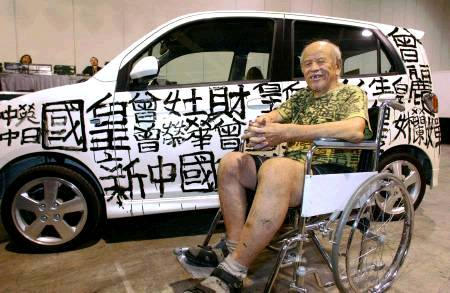 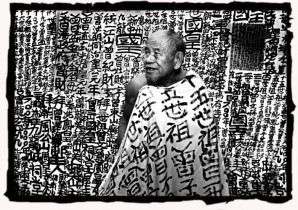 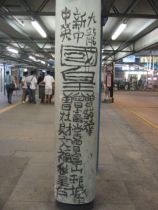 Tsang worked as a rubbish collector until he broke both legs in his 60s, after which he painted on crutches.

Dismissed for years as a crazy old man and repeatedly arrested for vandalism, The King finally became a Hong Kong hero when the city was handed over from Britain to China in 1997.

“Around handover time people were looking for signifiers of local identity,” says David Clarke, professor in the Department of Fine Arts at Hong Kong University.

Lau Kin Wai created the first exhibition of Tsang’s work in 1997 and Hong Kong designer William Tang used his graffiti for a dress collection that year — suddenly, the King of Kowloon was cool.

He went on to feature in the Venice Biennale art show and his later pieces, written to order on paper, wood and other objects, have become collectors’ items.

But it is The King’s original street art which his supporters feel is his most important.

“Part of the meaning of his work is for it to be in public,” says Lau. “Something should be done to preserve it in its original place.”

The LCSD told AFP it believed Tsang’s graffiti should be “preserved in situ as far as possible to reflect their context” and has put up plastic casing around two of the remaining works, on a pillar and a lamp post.

But it says it cannot act to protect the two others as they are on private property.

A jumbled collection of characters painted around an electricity metre box is fading fast and metal doors covered with graffiti on another electric box at an old theatre set for demolition will be moved by developers.

They have pledged to protect them and are looking for museums or art organisations that might want to display them.

Questions have repeatedly been asked as to why more has not been done to save Tsang’s street art, but the LCSD says it has done its best to preserve his “less damaged works… where practicable”.

With his public work all but gone, Tsang’s supporters are now determined to coordinate a full archive.

Critics and curators have collaborated on a new book, “King of Kowloon: The Art of Tsang Tsou-choi”, due out in May, which says it is the first major monograph of his work and includes rare unpublished photographs.

Street art is far from ubiquitous and the work done by the handful of small crews is often quickly painted over by the authorities, as was Tsang’s.

“All young graffiti artists should know about The King. He was a pioneer,” says 27-year-old street artist ‘jams’ who told AFP he had been arrested and cautioned by Hong Kong police for his own work.

“He never gave up — he went out and did what he wanted to do and wasn’t scared of the authorities. That’s why he is an inspiration for us.”