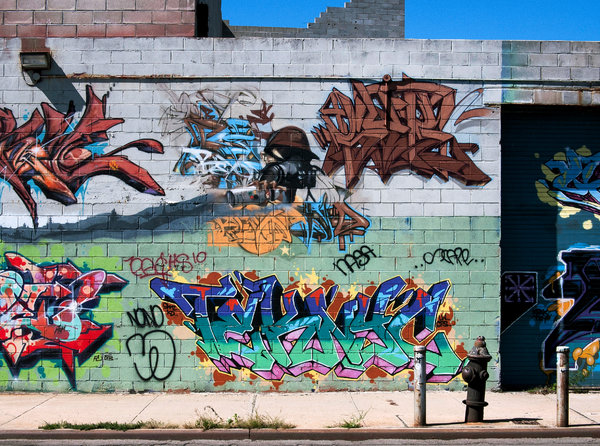 The masked artist hovering over the Bronx sidewalk is but a phantom. The cinder block wall on West Farms Road near East 172nd Street, which for years was a gallery of graffiti murals, is gone, too. It has been replaced by a blue wooden barrier festooned with demolition permits and a sign hawking “CHEAP DIVORCE.”

In January, construction is set to begin here for 237 units of about 1,300 apartments at modest prices in what is a marginal industrial area in West Farms. The demolition eventually will go one block west to Boone Avenue, whose warehouses and garages have long been a world-famous showcase for artists such as Cope, the Royal Kingbee and Skeme.

The gradual loss of these walls, like last week’s sudden whitewashing of 5Pointz in Queens, has street artists wondering where they — especially younger, less established artists — will be able to paint. For J. J. Ramirez, an “original school writer” whose tag, Mico, covered subway cars and walls starting in the late 1960s, the implications are clear.

“The whole thing boils down to class warfare,” Mr. Ramirez said. “People all over the world are wondering why they did that to 5Pointz. My answer is, why not? Do we really think some landlord is going to give a damn about the culture of the working class? This was an art form invented by the children of the working class, not children with last names like Trump or Rockefeller.”

When he said as much on Facebook last week, the responses were immediate and passionate: Who asked permission to do graffiti in the old days?

“The writers’ community is concerned,” said Carolina Diaz, an artist who works under the name Erotica67. “A lot of the writers say they won’t have the freedom to express themselves. People might take art into their own hands, like it was back in the ’80s.”

Ms. Diaz and her husband have been regulars along the Boone Avenue strip, which has been a stop for the global graffiti showcase known as Meeting of Styles. Not just anyone can paint there (though local taggers sometimes dash in and paint over an established artist). For years, the muralists were given permission by a business owner on the block.

Recently, a huge new mural was painted there by Skeme, featuring a B-boy with angel wings and a halo, surrounded by pieces painted by Dero and others. Up and down the block, walls and gates are adorned with colorful, curvy pieces by Cope.

The murals are the only warm touch on an otherwise bleak stretch tucked between the Sheridan Expressway and townhouses that rose from the rubble of 1980s abandonment. Recent zoning changes paved the way for a large residential development planned by Signature Urban Properties. While the plans were met with some grumbling about losing the open-air gallery, Gifford Miller, the former City Council speaker and a principal in Signature, said the Bronx had more pressing needs.

“We have a lot of respect for the artwork,” he said. “But we believe the community feels strongly that affordable housing is critically important and will hopefully make this area safer, too.”

Alfred Bennett, the Royal Kingbee, understands those needs. And though he makes his living doing artistic and commercial work, he says the dwindling number of walls will push younger artists to the streets. Already, the blue barrier that circles the lot on West Farms Road has been hit by local taggers.

“I guess Hunts Point is going to get saturated next,” he said. “There’s a lot of walls there.”

That worries Wilfredo Feliciano, known as Bio, whose Tats Cru rules Hunts Point. Not just anyone can go into their turf, just as they would not paint somewhere else without letting the local artists know.

For years they painted murals on the Lower East Side, paying building owners up to $1,000 to paint ads and personal pieces. But over the last 10 years, he said, he has gone from 15 walls to only one, as most were replaced by upscale housing, restaurants or billboards.

“There are hardly any spots left in the city for graffiti writers,” Mr. Feliciano, 47, said. “It’s going to mean that everybody’s going to be fighting for space. And you know what happens if they don’t have space to express themselves.”

Granted, he and his friends have a canvas nearby. Behind their studio is a full-size plywood replica of a 1980s subway car, which they cover regularly with intricate pieces and figures.

“We’ve been reduced to painting at the office,” Mr. Feliciano joked. “We can’t go painting trains at our age. At least this is easier in the backyard. And it has that shape we enjoyed in our youth.”

One thought on “As Legal Graffiti Disappears”