Martha Cooper in Prague / The Files 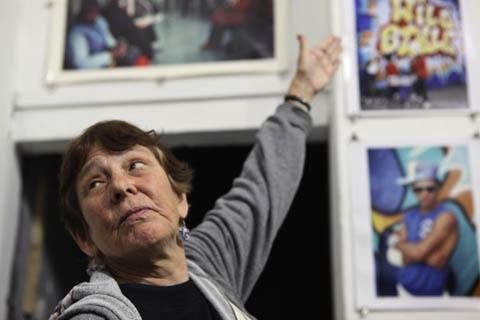 In her first years documenting the New York graffiti scene in the late 1970s, Martha Cooper was something of an outsider. Yet it’s easy to see why Cooper’s subjects took to the small woman from Baltimore, who stumbled upon an underground art movement on the streets of Manhattan’s Lower East Side between assignments for the The New York Post.

At the opening-night party for “The Martha Cooper Files,” her new exhibition at Trafačka’s Trafo Gallery, the 70-year-old photographer, dressed in an “I (Heart) Graffiti” T-shirt, grinned and waved to her hundreds of fans and their smart phones – brandishing her own, to document the event on her Instagram feed. Asked later about the event’s enormous turnout, Cooper called it “heartwarming – I mean, what more could anybody want, really?”

“The Martha Cooper Files,” which runs through May 17, puts Cooper’s good humor on display. The exhibit features some of Cooper’s best-known photographs and spans her career from the late 1970s and the emergence of hip-hop culture until today.

Cooper says she hasn’t found a single use of the term hip-hop in print before 1982. “I didn’t think, ‘Oh, I’m photographing hip-hop’,” she explains. “I was following … particular kids and happened to photograph what turned into hip-hop.”

Hung from silver clips on two floors of the gallery, the photographs document the swift evolution of hip-hop from an unnamed, and illicit, culture to a New York trend to an international phenomenon. Though Cooper holds a degree in anthropology, the photographs are a testament, not to an ethnographer accessing a culture outside her own, but rather to a community embracing its enthusiastic documentarian.

Cooper’s career owes much to a chain of serendipitous encounters. While shooting a series on children at play on New York’s Lower East Side, Cooper met a 14-year-old boy, the “writer” HE3 – the term writer referring to an artist who “writes” his (or, less frequently, her) name, or “tag,” in public spaces. He showed her his sketchbook and asked her why she didn’t photograph graffiti. HE3 introduced Cooper to Dondi, whom the photographer calls a “king” of the scene, and Cooper later accompanied him to paint a subway car, she herself providing some of the paint.

Following her meeting with Dondi, Cooper was befriended by other writers in the community and accompanied them to train yards to document the way they worked.

“I am more interested in the process of painting than I am in the finished [product],” Cooper says, and admits, in a low voice: “I kind of had to learn to like the art.”

Yet she speaks of the writers and their “youth culture” with undeniable respect. “They were using modern materials, and they rejected existing culture,” Cooper says. “And it really didn’t have to do with whether they were rich or poor or white or black or Hispanic; it was always universal. It had to do with skills.”

While Cooper documented the writers at work, another urban photographer, Henry Chalfant, was photographing the art itself, working quickly to capture photos of subway cars that, when he pieced the negatives together, would create composite images of their painted exteriors. The writers introduced Chalfant and Cooper to each other, and the two collaborated on Subway Art, the 1984 book now considered the bible of the graffiti art movement.

“I never got caught,” Cooper confides in a whisper, as if New York cops were lurking somewhere in the gallery. But the illegality of the work appealed to her, and she kept her New York Post press pass at hand, in case she and the writers ran into trouble.

In the nearly 30 years since the publication of Subway Art, Cooper has remained loyal to the subjects of graffiti and hip-hop culture, but her palette has changed. During a trip to South Africa, to photograph street life in Johannesburg’s Soweto, Cooper was struck by the similarities it shared with Sowebo, the southwestern district of her native Baltimore. She now takes a bus from Manhattan to Baltimore almost every other weekend to photograph street life in the area for a project combining work from both places. Cooper also has a continued interest in documenting the work of female artists who manage to break into the boys’ club of hip-hop.

After giving a guided tour of the show, Cooper smiled and shook hands with the many visitors seeking an autograph, each of which she adorned with a cartoon drawing of an SLR camera. It was clear that not only has Cooper learned to like the art, but she herself has become adored by those who love it.

For her 70th birthday this March, and in repayment for her tireless documentation of their art, New York writers painted a mural of Cooper’s nickname, Marty: “Thanks to you our work survives!” the wall read. Touched, Cooper captured the mural on camera before the work, like most of the others she has documented, disappeared.

Morgan Childs can be reached at features@praguepost.com

via Hip street art and artists – Features – The Prague Post.

2 thoughts on “Martha Cooper in Prague / The Files”